skip to main | skip to sidebar
Home - is where I want to be / But I guess I'm already there /I come home -
she lifted up her wings / Guess that this must be the place...
- Talking Heads, "Naive Melody"

Is it strange that I can't remember what first moved me to make bread? I remember the kitchen I made it in, on the 1800 block of Commonwealth Avenue, a wretched little space with one balky window that looked into an airshaft. The refrigerator was older than I was, and needed frequent defrosting -- something I often did with a hair dryer, in defiance of all common sense. Our kitchen table was a folding card table I ordered from a Spiegel catalog (I had no idea how to shop back then); it had a green checked tablecloth, and was not by any means an ideal surface on which to knead bread. It would be years before I acquired a stand mixer, or a decent table.

It's not as if I grew up with memories of fresh bread wafting through my mind. We bought cheap, square supermarket loaves, and I ate them with peanut butter or salami. An unvarying menu met some need in me that is probably not all that obscure.

Still, one day in that unpromising kitchen, I put yeast and flour and water together and made the first recipe in Bernard Clayton's landmark tome. If I knew who Julia Child was, it was a vague awareness of her on television, and I had never heard of Dorie Greenspan. The Internet was in its infancy. The bread was underkneaded and overfloured, but I eventually made more of it.

That is one of the things about bread. It is almost impossible to make it, or to eat it, without thinking of all of the breads that have gone before. It gets its hooks into you deeper than just about anything else, in my experience, however casual your baking. Yeast, flour, and water are a time machine. You can look through your own kitchen window into ancient Mesopotamia, where the yeast (probably) made its way into bread via beer, into colonial America, into ovens around the world.

The simplest of animals and an accident of its biology link your hands with thousands before. I can't imagine a better choice for the inaugural recipe of the new Tuesdays with Dorie project.

I am not particularly good at these setup shots, but here are the ingredients. 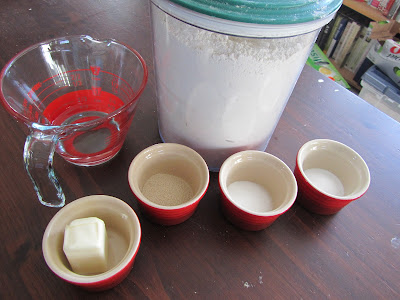 The dough ready to rise. 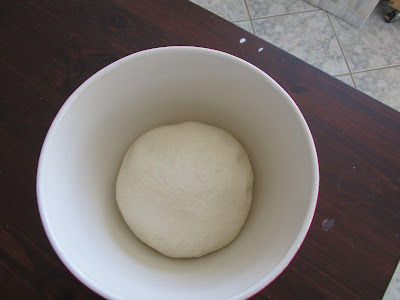 First rise. (Elapsed time: sufficient to bathe a toddler and clean up the kitchen.) 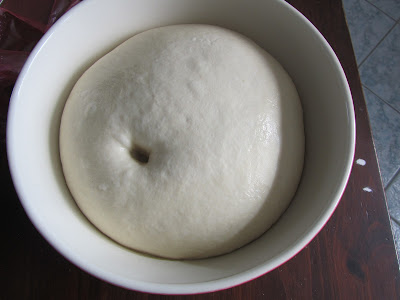 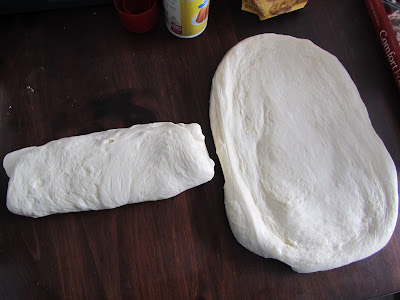 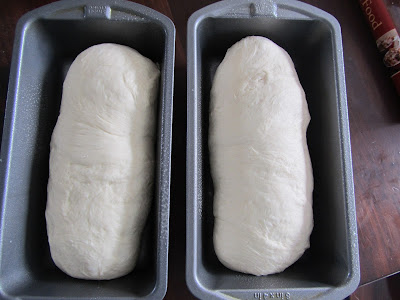 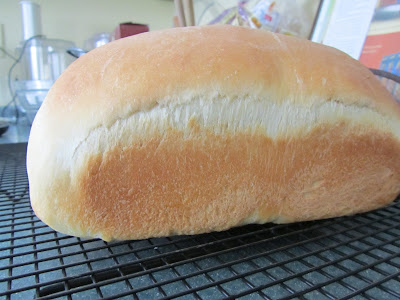 The verdict? Perfectly pleasant, smooth, and scrumptious, but a bit saltier than I would prefer in a perfect world. I could probably have let it enjoy a longer second rise, but I thought we had somewhere to go in the afternoon. Still, an auspicious beginning for the new project!

The recipe is posted with one of this week's hosts, Someone's in the Kitchen.
Posted by Rebecca at 6:25 PM

You really need to tell me, how you managed to keep the dough so wet!

Hi Lilly! Whenever I make bread, I add about a cup less than the recipe says, and only add more if it feels necessary. That only came after making a lot of very dry bread! :) I love your pesto idea, that looks great.

Looks Perfect!!! It was really fun Baking along with all yo irremediable bloggers :-)

It was a great start to the project. I'm dazzled by all of the blogs! :)