skip to main | skip to sidebar
Home - is where I want to be / But I guess I'm already there /I come home -
she lifted up her wings / Guess that this must be the place...
- Talking Heads, "Naive Melody"

Making sweets for other people is a bit of a tricky thing. More so than simply cooking for them, I think. A meal is sustenance, after all, a basic thing. Dessert is the extra mile. You want to make something they will like. You want them to like you for it. You want them to feel both appreciated (look at what she did! for me!) and appreciative (look at what she did!) without it being, well, all about you because you are, after all, doing it for them. 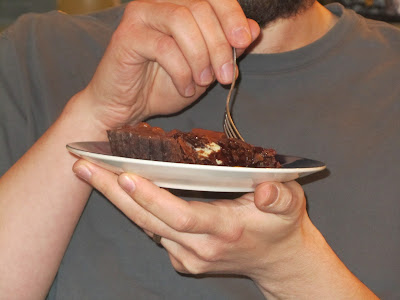 Sometimes I wonder how humans manage to do anything at all.

This is a surprisingly easy recipe. It does take time, what with making and prebaking the dough, but there was nothing particularly tricky about any of the steps (she said, fresh off a cake that required making two different sorts of caramel). That, too, makes it a good dinner party recipe, assuming that you have most of the day to fuss around with things; at least you'll know that dessert is done.

I made one error and two deliberate changes in this one. The error was adding a whole egg, not just the yolk, to the tart crust. I'm pleased to say that it didn't seem to be a problem. 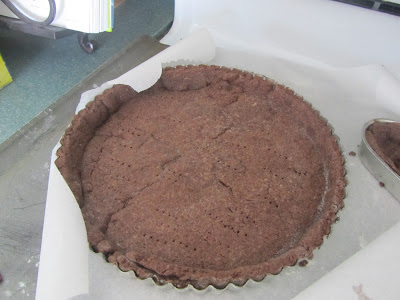 The first change was that I made one 9-inch tart instead of 6 tartlets, because much as I adore Dorie and Julia, and much as I love an excuse to buy cooking gear, I couldn't really justify going out to buy a bunch of tiny tart rings. I had to bake it somewhat longer than the recipe stated before the center firmed up. 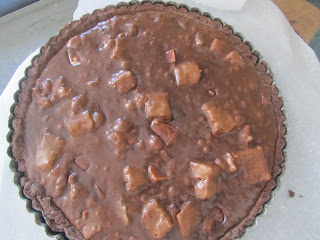 The second change was that I skipped chilling the rolled dough before baking it, because I have a side-by-side refrigerator that does not have room for a sheet pan full of tart. This, again, did not appear to harm the result.

I suggest making this for people you love, as soon as possible. Not a person, mind you. It's just as well that this post comes too late for Valentine's Day, because you need a lot of friends to help you eat it, and they should be good friends, because this is a very good dessert. This is serious chocolate. Six servings? I think we got ten.

For the recipe, see Good Eats and Sweet Treats, one of the hosts this week.
Posted by Rebecca at 1:13 PM

I love the chunkiness of your chocolate/cookie bits in your tart. Ours were very finely chopped and it might be nice if the separate flavours were easier to discern. We made a 9" tart, too, and for the same reasons. I need to ration my kitchen gear acquisition!

Thank you both for stopping by! I thought this was a really fun recipe. Looking forward to the March ones already. :)

It's not always necessary to follow all the steps!! Thanks for stopping by my blog, I'm following yours from now one, I love it!

Desserts are definitely very taste specific - but it sounds like it worked out well for you.
And thanks for the note about sheet pans & side by side refrigerators. I am currently refrig. shopping and it would be tragic if I overlooked a detail like that!

It looks great! I always love hearing about shortcuts or changes that don't affect the final outcome!

Beautiful tart! Ten servings seems to be right for a large tart. It is pretty intense!

Cher, if I was fridge shopping, I would bring my biggest sheet pan and a pizza box, and make sure I could fit them in. :)

Thanks Heather and Lori!

You definitely need a passel of chocolate-worshiping friends to polish these tarts off. I actually froze half of mine - I liked it, but I'd had enough. Your tart is lovely - thanks for baking along with us this week.

I wish I had thought to freeze ours. :) We picked at it for most of the week and still couldn't quite finish it!

Thanks for stopping by. :)